We are North of Dallas today visiting a friend of Mariana and checking out a local park. Our tour seems to be hitting a lot of smaller town. I feel that we have been missing a lot of the big tourist attractions and major things that most people see. But we are also going to a lot of parks and talking with local people. There is a dichotomy to it and I want to make sure we are maintaining a nice balance. 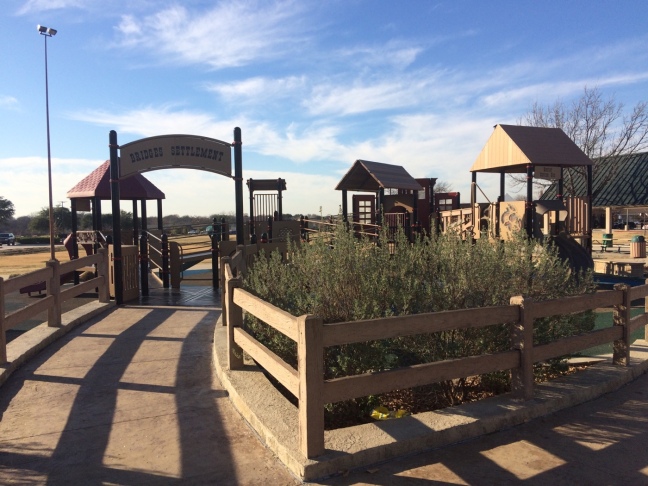 Tuesday kinda felt like a bit of a write-off. I slept in late with the kids and cuddled all three of them. Then slowly we got up and had breakfast and then did school work. School for Katia was multiplication table and writing an email. School for Giovanni and Maya was letters and tracing. After school work we went over to Target and the kids got to look at toys for a while. After Target we had a relaxing lunch then drove to a KOA to dump. While parked in a site emptying the tanks, all three kids and myself each got a shower which was nice. Then we drove to a Cracker Barrel, ate dinner, the kids watched a movie and I exercised.

After writing it down, I feel it is my attitude that decides if the day is successful or a write-off. The kids got to spend a whole day with me. I am seeing Giovanni and Maya getting better at their letters. I am helping Katia work through her mistakes and figure out where her errors are. I am also teaching them how to stay calm when things don’t go there way.

If I look at it with a negative attitude then yes, we did not get much done today.

But if I focus on the positives that happened today, then it looks like a pretty good day.

Thursday December 20th, we are in Arlington Texas. We stayed at a Cracker Barrel and after doing school work, we took the kids to the local library. Giovanni and Maya enjoyed getting stories read to them. Katia read a mountain of books. 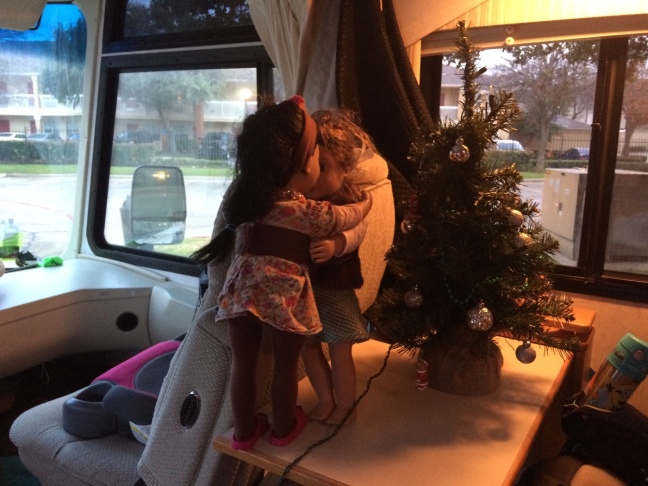 After the library we went to Six Flags over Texas and stayed there from 2PM to 8PM which was enough. We had lots of fun and Giovanni and Katia got to try their first big roller coaster and they enjoyed it.

Six Flags also had a hill set up for snow sledding which we tried. There were three park workers at the top and three at the bottom making sure you followed the rules. It was not my usual sledding experience.

We had a fun day but by the end, my voice was going and the constant noise of a theme park was getting to me. I was worn out and just wanted to get to a nice quiet place. We managed to get everything organized and are back in a nice quiet parking lot for the night. 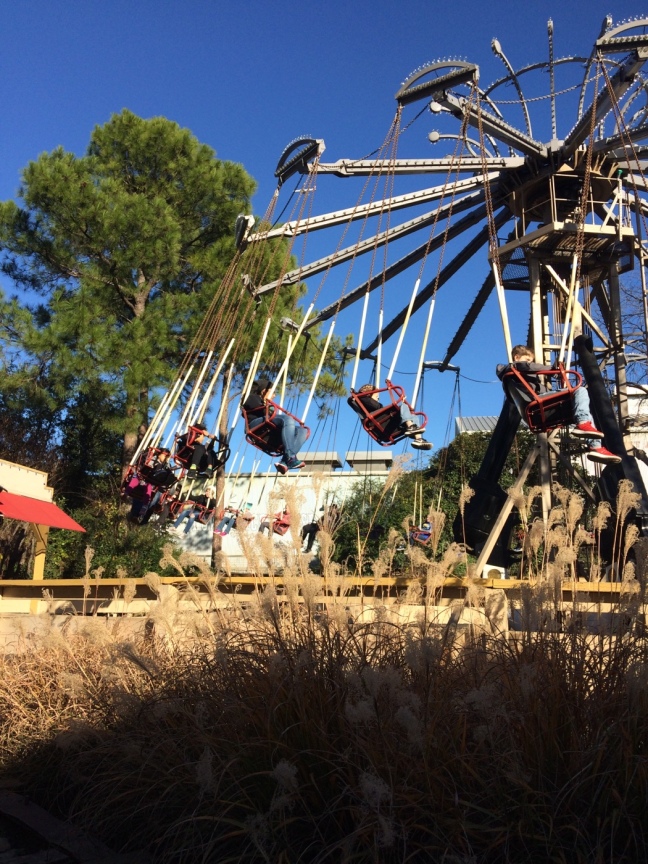 Friday was another relaxing morning followed by an intense afternoon at an amusement park. We went back to Six Flags again. The kids stuck to fairly easy rides and the day went much smoother. Towards the end of the day Maya did get really tired and was becoming quite erratic. 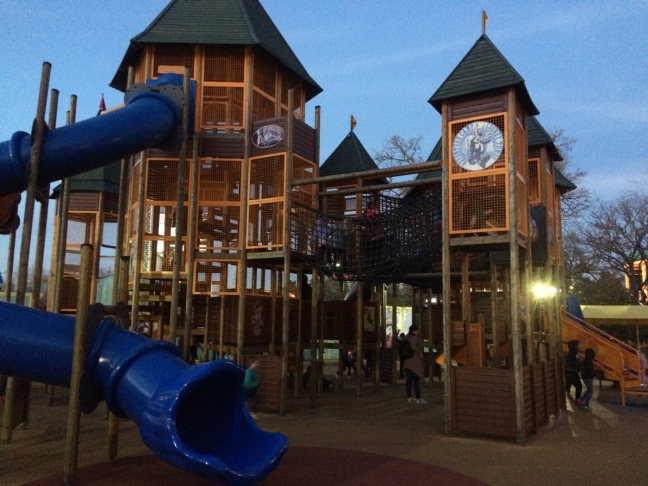 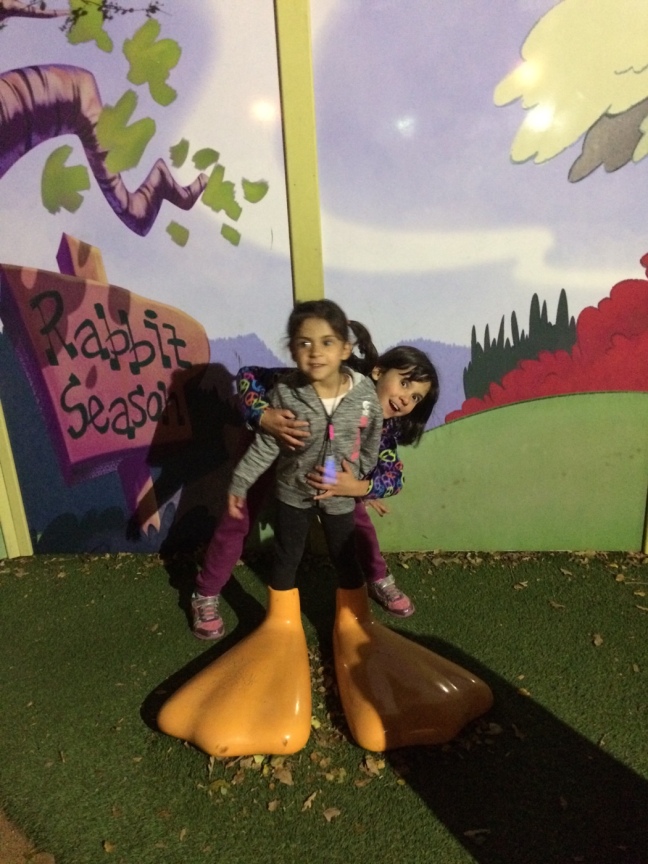 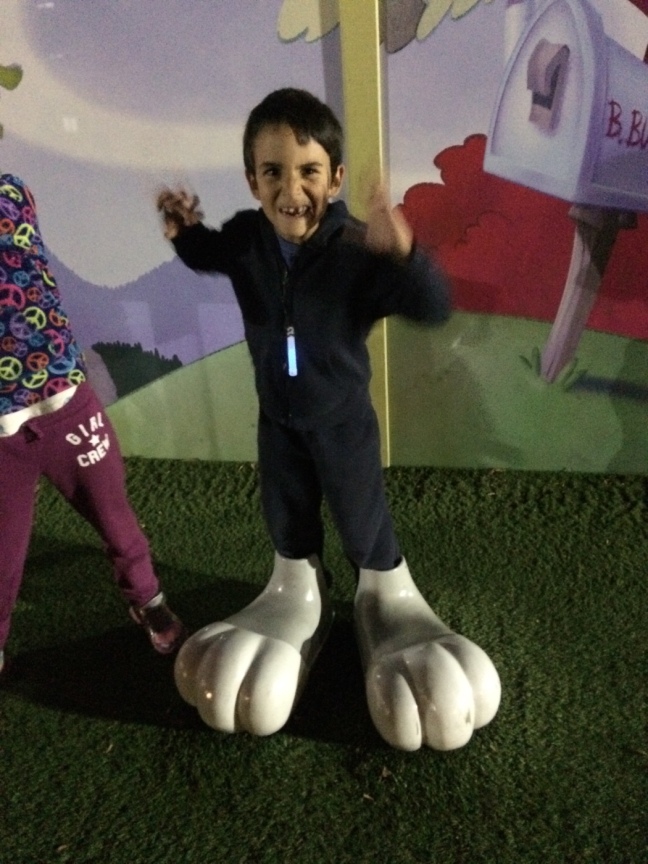 Surprisingly one of the kids favourite rides was the playground at Six Flags. They have a large climbing structure with lots of slides and a nice soft flooring around it which the kids loved. They ran and ran and ran. It started to get dark and I lost sight of them amongst the 50 other kids running around. I managed to lure them back to me with two emergency glow sticks that I keep in my back pack. They have nice handy break away necklaces and the kids loved having them. It was much easier to keep track of them after that by looking for the two blue glow sticks.

Saturday we drove to pick up a book and then to an Old West Cattle drive in the Stockyards of Fort Worth. We did pass the AT&T Stadium and the Cowboys were playing today but it looked way too crazy for us to get in there. 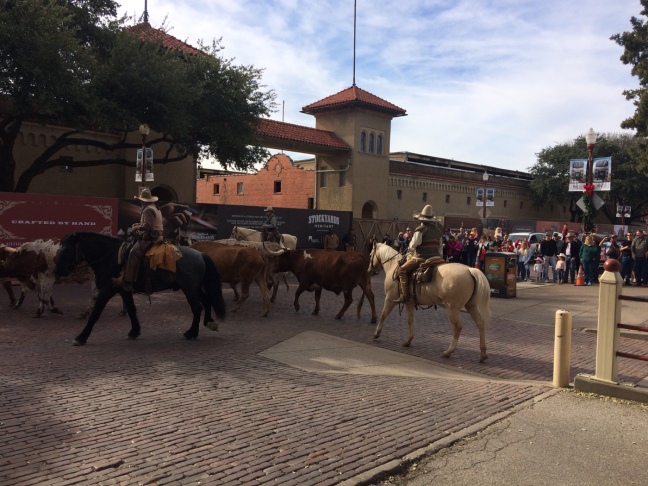 The cowboy cattle drive was fun to watch and some actors put on an old west gun shoot out. I think the kids really enjoyed it.

Our late lunch was Chicken Fried steak at the Horseshoe Hill Cafe. A cowboy recommended it so we had to go. One chicken fried steak fed out entire family. We also ordered some fries and Cowboy Mac And Cheese sides but still, there was a lot of food. There is always more in Texas.

After lunch I went to look for a better hat but I couldn’t find one that worked for me. I also learned that you can spend over $500 on a nice cowboy hat. I just don’t think a cowboy hat is me. I will keep my eye out. For now I will continue to wear my $20 BassPro hat which works and takes a beating.

Final thoughts, after a full day, I idly surfed twitter and YouTube while the kids watched a movie. To be honest, I felt more worn down after surfing than if I had been working at something. I don’t think idle surfing is good. There is a steady stream of internet content out there and it is curated and presented to get my attention. I need to fight the boredom and push myself to do more rewarding things that do not include the instant gratification to internet surfing brings.

Sunday we went to church and then drove to Graydon Texas where we have rented a house for Christmas. We arrived at 3:00PM and the Airbnb hosts met us at the house for a tour. The house is very nice and there is a view of the nearby lake. We will be at this house until the 26th. The kids really enjoyed getting to have a bath in a full bath tub but at bedtime you could see that they were missing the tight comfort of the RV.

The sleeping plan was Katia would have her own queen bed. Maya would get her own nice big King bed. And Giovanni would sleep in the sunroom on a pull out couch. As I write this, Katia is restlessly trying to fall asleep but having trouble. Maya has moved to the pull out couch beside Giovanni because she was scared. Now we have one empty King size bed. I guess I could sleep there if I wanted.

Yesterday was Christmas Eve. We spent the day hanging around the house, playing with the kids and enjoying the simple pleasure of having a bath tub. I think the kids will appreciate having an abundance of water after being on this trip.

Christmas Day was spent opening gifts and talking to friends and family. Video calling makes it so much easier to keep in touch. It is still not quite as fun and intimate as being there but it does make it much easier. 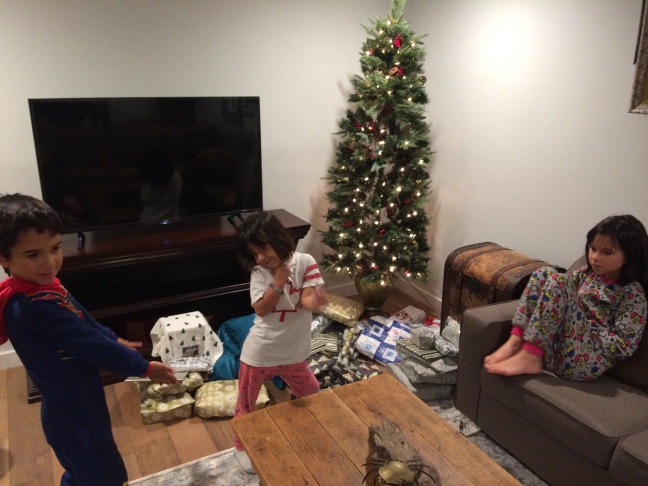 It was nice to just hang out together for the day even though it was forced because we don’t know anyone around here. I spent Christmas Day building lego with the kids and hanging out. Our only outing was to go to church at 12:30AM and it turns out it was the Spanish mass. Oh well, you take what you can get. It was the only church in Grayburn and the only other mass was at 8:30AM which would have been too early for us.